No embellishments, exaggerations, or flat out lies are part of this tidbit. AKA my children are a product of well, me.

Colin: Mom there is something coming through my gum

Mom: Thanks Colin. I really do try.

Mom: I would like to also thank the academy, naps, snacks….

Tomorrow he will hate me and tell me I’m mean, but I’m taking this moment! Even if its JUST a tooth.

Oh Husband, I really do adore you.

The way you play with the kids, say you love me

well it really does make my heart sing.

What doesn’t make my heart go pitter patter  however

Your snoring my dear, sounds like a chainsaw….in my ear

A snarling, grinding, snorting, god awful sound does come from your face

And now I sit up thinking about it

For years you denied it,

No, no my darling you were only in denial.

For I hear your concert every night like a snoring recital

A new pillow we tried

I resorted to earplugs, but those are annoying if you could not tell

Permanent dark circles under my eyes

a Zombie Mom I’ll be.

To put up with your snoring,

So here I am typing this precious ode to you.

To you, snoring dear husband and how it makes me want to shank you.

So last week I ventured out to take the kids to the movies, alone. I went in with the attitude of, “I’ve GOT this!” It honestly felt long overdue. The anxiety that can fall on me going out with both kids, is daunting. I’m always expecting: the gimmees, a tantrum, a bathroom break (or two), and not enough caffeine. However, the kids really wanted to see Paddington, and so a promise was made. Without further ado, here is what I witnessed.

1. Your school is closed for the day? Expect to see half of the school there.

The movie theater was basically ALL kids from our town’s elementary school. Every other minute my kids were waving, or shouting hello to a classmate. Mom’s, this is when you’ve reached “Cool Mom” status. All the cool Mom’s take their kids to the theater, noted. Also, major pat on the back for getting there early. Not exaggerating, there were no seats left when the movie started,

2. Your children will sucker you into something you wouldn’t buy them normally.

Icees, darn you luscious, syrupy sweet, artificially dyed, drinks of goodness. It was like a revolving door of their classmates getting these. As the concession boy looked at me, almost pleading with me to hurry up, I ordered them each an Icee. Would I regret this later, yes. Were they thrilled at the moment, yes. Handled.

It was like “Basic Moms” unite. We were ALL wearing the same thing. I marveled at each Mom walking in with the same outfit, with little to no differentiation. I was both satisfied, and mortified that I fit in. Baa?

The Mom’s that were around me knew ALL the neighborhood gossip. They were talking about whose Husbands weren’t around. What Mom was letting herself go. Who’s kid is a brat. Trash talking other Mom’s. It was popcorn worthy, and this was before previews!

5. A Grandmother or two will be there.

How can hey be spotted? They do not give a flip what their grandchild is doing. They got their grandchild a kid tray of junk food, and proceed to let the child grind popcorn and candy into the floor. Kid is kicking your chair, hilarious! Kid is being loud, this is a great trait! I could not stop gawking at this woman next to me. The amount of trash she left behind, and what she let her grandson get away with was unreal.

6. Your child will find a way to still be embarrassing.

We were making it through perfectly. The three of us sat, shared popcorn, drank their syrup, or um drinks, and laughed at all the normal parts. Some of the Mom’s and I even connected a bit. Then, Alex made an announcement, “I have FARTED!” Loudly, was clearly how he felt this needed to be announced. The rows around us roared. My cheeks were flaming red with embarrassment, and Alex beamed with pride. I leaned over and quietly, yet firmly explained to Alex that we don’t say these things. The damage was done. The Mom’s snickered at me, and I’m pretty sure my “Cool Mom” membership was revoked.

7. Most importantly: It won’t be that bad.

I ended up regretting nothing. Ok, except the drinks. My children were BOUNCING off the walls for the next couple hours. I let it go about the fart joke. It is what it is. We didn’t need any bathroom breaks. I made them go before we left the house, and let them know there wouldn’t be any breaks. There were no tantrums. The kids sat, and behaved throughout the rest of the movie, and the movie was actually good!

There you go! I made it! Survived! Conquered! Even, though I might not be hanging out with some of these other Mom’s anytime soon, I still had fun.

Last night, Colin lost his 8th tooth. It was a marvel to behold! Not the tooth, the gaping hole of the eight teeth that have left his mouth. I don’t even know how he eats sometimes. There really is nothing quite like the awkward stage of your child appearing to have had one too many Mountain Dew’s. Well, even though we don’t drink Mountain Dew. You get the point! 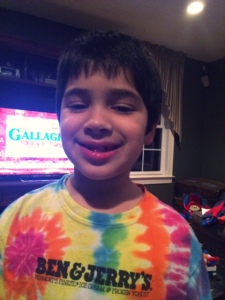 Well, in the mean time Alex was just in a whirlwind of excitement. He was grabbing tissues and asking to hold the tooth.  As he was jumping up and down, I found it completely adorable that he was happy for his big brother. Who wouldn’t, right?

As the excitement was winding down, I noticed Alex scribbling at the coffee table. When I asked what he was doing he replied, “I’m making a card for the Tooth Fairy!” Adorable! I was laughing and told him, ok, but he needed to hurry up. It was bed time after all!

Later, I carried through with my magical tooth fairy duties, and slipped the dollar under Colin’s pillow. Alex was sleeping in Colin’s bed, again. There was no doubt in my mind that he was there for the excitement of the Tooth Fairy.

Fast forward to this morning and waking the boys up. Colin was beaming from ear to ear when he found his loot. Once he was done staring at his dollar he asked, “what about Alex?” Um, what now? Alex popped up and felt around under his pillow and pulls out this piece of paper: 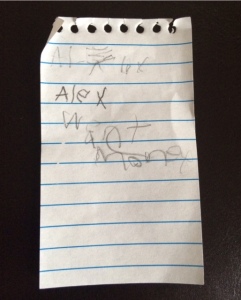 Holy freaking shenanigans. This cute card that my adorable child was “making” was a money demand?! Good lord. My reaction:

So Alex has learned his lesson. He realized the tooth fairy does not bring money upon demand, and he will need to wait until he loses a tooth.   It should be noted that Alex hates writing. Even though he is doing well with his letters in school, work like this is um, well, like pulling teeth. Pun completely intended. So kudos for his effort into his demand letter!

Anyone else have a good Tooth Fairy Story out there?

From Cubicle To Home
Life in Every Limb

Because most issues are life issues, if you think about it.

It's Not About Food (although it could be) -- It's About Life -- and Everything in Between.

The best we can do, is learn as we go.

With All My Affection

"If you are resolutely determined to make a lawyer of yourself, the thing is more than half done already" - Abraham Lincoln.